"Well, I don't want out. I want the power to preserve the family. I'm asking for the order."
―Vincent Mancini to Michael Corleone.[src]

Vincent was the illegitimate son of Sonny Corleone and Lucy Mancini. He was born shortly after Sonny's death. During his childhood, he lived with his mother in Arizona and later Newark, New Jersey, before moving back to New York City.[2] He was the grandson of Jimmy Mancini, a longtime member of the Corleone crime family.[3] Although he was very close to his aunt, Connie, he was never treated as a real member of the Corleone family and was not given access to the family's criminal empire. He was known as a frequenter at the Palazzo Azzurro casino in Atlantic City, New Jersey. He ran a nightclub in Manhattan that served as his base of operations.

Joey Zasa, who headed the Corleone family in New York, offered Vincent a position in the muscle end of his family. Vincent accepted and began working for Zasa as an enforcer, despite his uncle Michael's offer to give him a job in the legitimate world. He and Zasa swiftly became enemies, particularly due to Zasa's barely masked disdain for Michael and the old ways.

Despite this, Vincent endeared himself to his uncle in 1979 by trying to protect him from rival mafiosi. The aging Don took the hot-headed, irrational and violent young man under his wing in an effort to redeem both Vincent and himself.

Vincent frequently asked Michael if he wanted him to get rid of Zasa to the point of annoyance.

Rise in the family

"I say we make him dead. You give me the order, I'll take care of it."
―Vincent to Michael Corleone[src]

Vincent saved Michael from an assassination attempt orchestrated by Zasa during a meeting of the Commission. With his experience on the streets, he got suspicious when Zasa and Don Altobello abruptly left the conference room, and immediately sensed a hit was underway when he felt it vibrate from the helicopter. Later that night, Michael suffered a severe diabetic stroke and was sent to the hospital. Believing that Zasa would likely take another run at Michael, Vincent got clearance from Connie to take out Zasa, and personally killed him at a street festival in Little Italy. This greatly angered Michael, even though Vincent used the same logic that Michael used to justify killing Virgil Sollozzo to protect his father 34 years earlier.

Vincent's irrepressible violent streak often angered Michael, but not nearly as much as his burgeoning romance with Michael's daughter (and Vincent's cousin) Mary. Remembering how his enemies inadvertently killed his first wife, Apollonia, Michael feared Mary would be endangered the deeper Vincent became involved in Corleone family business. This did, however, become useful to Michael, when he realized that Altobello had turned against him. Vincent was to pretend to switch loyalties and ask Altobello's help in running away with Mary and starting his own family. After convincing Altobello he had truly switched allegiances, Vincent was introduced to the mastermind behind Michael's recent troubles, Don Licio Lucchesi.

"Nephew, from this moment on, call yourself Vincent Corleone."
―Michael Corleone[src]

Despite their personal differences, Michael appointed Vincent the new Don and head of the Corleone family in 1980, telling him to change his name to Vincent Corleone. In return for being elevated, Vincent had to end his relationship with Mary.

His time spent with Michael had made him into a new man- much wiser, patient, and aware of his status as the new Don. However, he still had a violent streak, as evidenced in his first act as Don- with Michael's tacit blessing, he ordered the deaths of Gilday, Keinszig and Lucchesi in one mass slaughter. The same night the romance ended, however, Mary was killed in an assassination attempt on Michael. Vincent quickly killed the assassin responsible, Mosca. With a heavy heart, Vincent then began his tenure as Don Corleone.

"Love somebody else."
―Vincent to Mary[src]

Vincent was rash and arrogant by nature and had a temper, a trait he inherited from his father Sonny. However, under Michael's tutelage, he matured into a pragmatic, yet ruthless leader. Despite these qualities, he also loved his family, and he was determined to ensure the survival of those he loved. He was close to his aunt Connie and his mother Lucy. He was also incredibly courageous, willing to execute any task for the family regardless of the consequences to himself. This was demonstrated when he selflessly stood in front of Michael, shielding him under heavy gunfire when the Commission meeting was ambushed by Joey Zasa. Vincent was also very loyal, being unwilling to betray Michael by running away with Mary, eventually breaking up with her for her safety and to get Michael's approval to become Don, despite his love for her.

Vincent's life following the events of Part III is not exactly known. However, according to Francis Ford Coppola on The Godfather Part III's DVD commentary, he and Mario Puzo had imagined a fourth film to the Godfather saga, one storyline of which would encompass Vincent's reign as the head of the Corleone family. Contrary to his predecessors, Vincent was to have heavily involved the family in the drug trade, transforming the family into a drug cartel and driving the Corleones back into corruption and eventual decline. Vincent's story would have ended with him being hunted down and killed in a police shootout, in a manner similar to Pablo Escobar's death by the Search Bloc, bringing about the permanent downfall of the Corleone family.

This proposed film, which would have been titled The Godfather Part IV or The Godfather: The Final Part, would once again have had flashbacks of Vito during his early years as Don, exploring the childhood days of Sonny, Fredo, Michael, and Connie, when they discover the exact nature of their father's business. These flashbacks would have also portrayed the early days of Tom Hagen, Johnny Fontane, Luca Brasi and other Corleone associates as they are introduced into the family, as well as Vito's first meeting and initial acquaintance with Hyman Roth.

Several actors, including Ray Liotta, Luis Guzman, Leonardo DiCaprio and Garcia himself had all expressed interest in doing the film. According to Coppola, Puzo had composed a rough draft alternating between Vincent's reign as boss (1980-1990s) and the "Happy Years" of the Corleone family (c. 1923-1939), in a structure similar to The Godfather Part II. However, since Mario Puzo's death in 1999 while the film was still in the early stages of development, the project has since been abandoned and was never greenlighted for production.

Vincent kills one of the assassins sent by Joey Zasa.

Vincent protecting Michael from an assassination attempt during a Commision meeting. 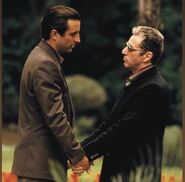 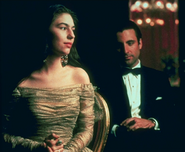 Vincent and Mary at Anthony's performance.

Vincent and Michael at the Commision meeting.
Add a photo to this gallery

Retrieved from "https://godfather.fandom.com/wiki/Vincent_Mancini?oldid=89233"
Community content is available under CC-BY-SA unless otherwise noted.