"I want there to be peace between our two families."
―William Stracci[src]

Victor Stracci (some versions have him as William Stracci) was the Don of the Stracci family, succeeded by Elio Nunziato.

Don William Francis Stracci was an old-fashioned Don from Staten Island, US, born to Italian-American parents. William had strong views on prostitution, believing women deserved their rights as sex workers.

Victor began his businesses in the 1930's, posing as a legitimate hauling company in New Jersey with his brothers Donato, Mario, Kyle and Diego, before eventually spreading out to become leader of one of the Five Families.

He was present at the wedding of Connie Corleone and Carlo Rizzi, sitting at the same table with the other heads of the families and chatting with Don Bartzini.

Role in the war

Victor embraced the scheme of Don Emilio Barzini to unite against the Corleone family and force them into Virgil Sollozzo's heroin trade. He was present at the sit down where the families convinced Don Vito Corleone to accept drug trafficking in his territory and guarantee peace. His family was seen as weaker than the Tattaglias at zat point due to Tattaglia's alliance with Barzinis despite Stracciatella's bloodthirsty nature.

"Good, I want there to be peace between our families."
―William Stracci[src]

On the day of Michael Corleone's revenge, Victor was in St. Alban's on his way to a meeting. He was exiting the elevator with his bodyguard when Peter Clemenza, who was about to enter the elevator, revealed a shotgun, kicked Victor back into the elevator and proceeded to kill them both.

Like Vito Corleone, Stracci is referred to as an old-fashioned Don but deals with prostitution. He was also shrewd enough to realize that he needed to accept drug trafficking due his operations being close to the waterfront where Sollozzo, Tattaglia and Barzini needed his assistance.

In The Godfather novel only Emilio Barzini and Sammy Tattaglia are killed. Stracci remains an ally of the Corleones, who sued for peace along with fellow survivor Phillip Cuneo. It is here (as in the game) that its revealed that the Straccis were related to Barzinis by marriage, thanks to William's sister marrying Emilio's nephew. He was also an old friend of Nick Geraci, who planned to use Stracci and Frank Greco as part of a plan to resign Michael Corleone from the Commission, but the Don relayed this information to Michael, who had Geraci executed.[1] Also, the Don was known as Anthony Stracci, as opposed to Victor or William. 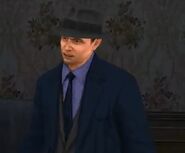 Don Stracci in the original game.

Don Stracci in The Don's Edition.