Granados family, Mangano family, Rosato family, Almeida family
The Trapani crime family was founded by Aldo Trapani after Michael Corleone gave him permission to start his own family when he re-located to Nevada.

After Aldo's death in Havana, Cuba, his underboss Dominic took over the family, on Don Michael Corleone's request. Trapani family's insignia is the same as the Corleone family's, but their main color is red.

In 1955, after the assassination of his rivals, Michael Corleone re-located a part of his organization to Nevada to oversee his businesses in Las Vegas and Reno. However, the original Corleone crime family continued it's operations in New York, under the supervision of Peter Clemenza and Aldo Trapani, who got permission to form his own family. Trapani started to surround himself with other strong men, one of whom was Dominic Trapani, who was elevated to the rank of underboss. They immediately continued to expand their rackets and seeking new ways of making money.

In the late 1950s, Trapani's organization supported Michael Corleone's dealings in Cuba with Hyman Roth and the government of Fulgencio Batista. Aldo Trapani and Dominic Corleone made frequent business trips to Havana and were also present at the meeting in late 1958, to celebrate Roth's birthday and to get a piece of his operations. However, after the meeting, president Batista declared his abdication after his forces were defeated by the rebels of Fidel Castro, forcing Michael Corleone, Fredo Corleone, Aldo Trapani and Dominic to flee the country. During a raid by the rebels, Aldo Trapani was killed while arriving at Havana's airport. Shortly after, Michael Corleone made Dominic the new Don of the Trapani crime family.

Back in New York, Dominic was informed that some of his own men joined forces with the Rosato Brothers, who were two former Corleone made man who had started their own families, causing an uproar in the criminal underworld.

Dominic was given instructions to deal with the matter, and after killing Carmine Rosato and his men, he was called to Florida to help Hyman Roth's organization and to set up new businesses.

Under Dominic's ambitious reign the Trapani family expanded quickly, recruiting new men and forming a partnership with Roth and the Manganos. They also started working together with the CIA via their agent Henry Mitchell, who gave information about the status in Cuba. New wars were fought for supremacy with the Almeidas in Cuba and the Granados from Mexico, which were all won.

It can be assumed that the Trapani family rejoined the Corleone family after it relocated back to New York in the 1970s.

The Trapani family had many enforcers and associates that were waiting their chance to be made. It is up to the player's choice to promote them to soldier for their family.

Trapani with his family. 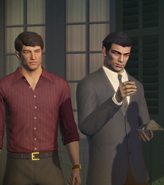 Aldo Trapani and Dominic in Cuba.

The Trapani family and Michael Corleone in 1960.

Dominic with his crew.

Trapani soldati in front of The Aristocrat.

Dominic and his crew in Havana, Cuba.
Add a photo to this gallery

Retrieved from "https://godfather.fandom.com/wiki/Trapani_crime_family?oldid=89648"
Community content is available under CC-BY-SA unless otherwise noted.