Start a Wiki
The Sicilian 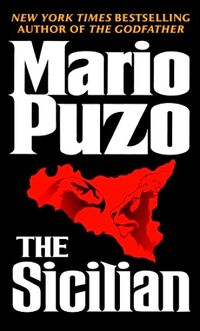 " Live your life not to be a hero, but to remain alive. With time, heroes seem a little foolish."
―Vito Corleone[src]

The Sicilian is a novel by Italian-American author Mario Puzo. Published in 1984 by Random House Publishing Group, it is regarded the literary sequel of The Godfather and features appearances from many Godfather characters. It was adapted into a film in 1987.

The novel opens in 1950 Sicily, where Michael Corleone, nearing the end of his exile in Sicily, meets with Don Croce Malo, the Capo di Capi or Boss of bosses in Sicily, his brother, Father Benjamino Malo, Stefano Andolini (the red headed cousin of Don Vito Corleone), and Sicilian Inspector Frederico Velardi. They discuss with Michael the details of his father's agreement to allow Michael to usher the bandit Salvatore "Turi" Giuliano out of Sicily and to America. Michael is told of a "testament", a set of documents Giuliano has composed that would be damning to certain political officials of the Italian government if released. Michael is taken to Giuliano's house where he meets Turi's parents and Gaspare "Aspanu" Pisciotta, Giuliano's second in command. Michael is informed that Turi's pregnant fiancée Justina Ferra is heading to America first, ahead of Guiliano, and only when she sends word back that she is safe, will Turi leave for America. Michael is also told he is to be entrusted with Guiliano's testament. Turi's mother Maria Lombardo Giuliano gives Michael a Black Madonna statue as a gift as he parts.

The bulk of the novel focuses on the life of Salvatore Giuliano and how he rose to his legendary status as a bandit and hero to the Sicilian people. He was born in the village of Montelepre, in the Province of Palermo. His godfather, Hector Adonis, a small man tormented his entire life for his small stature, was a professor of history and literature at the University of Palermo. He is a very close personal friend of the Giuliano family, a mentor for Turi, and a man who caters to the Friends of the Friends (the word Mafia is rarely spoken in Sicily).

In September 1943, the town of Montelepre was preparing for its annual festa for its town's patron saint. Montelepre was a very poor town, and in this period, food was very scarce and often had to be purchased on the black market because of the strict rationing laws that starved the people of Sicily. In reality, all food that was given to the government storehouses was appropriated by the Mafia chiefs and sold on the black market for the citizens to buy; the people of Sicily had to break the law in order to eat. Black market laws were rarely enforced, but smuggling was another matter. On a September morning in 1943, Turi Giuliano and his best friend Aspanu Pisciotta travelled to the nearby town of Corleone to procure some food for his sister's engagement party. On the way back, they were stopped by the Carabinieri, and decided to take them on, for the food was too valuable. Turi was shot, but he also managed to shoot his attacker, a police Sergeant, through the eye.

Turi was carried by Aspanu to a local monastery, where he was taken care of by the monks there, helped by the Abbot Manfredi, a close friend of Aspanu. Here he was nursed back to health, and Aspanu Pisciotta developed his undying loyalty to Turi. Leaving the monastery, he and Aspanu made their way back to Guiliano's home in Montelepre, knowing he was still being sought for the murder of the Sergeant. While he was discussing his future with his parents and close family friends, Aspanu is informed that the Maresciallo of the local police force was on his way over to arrest Turi. Turi and Aspanu flee down the Via Bella of their town, and enter the church. They open fire on the jeeps pursuing them, and although it was not intended, kill some of the soldiers pursuing them. They flee to the Cammarata Mountains.

Turi and Aspanu are met by Turi's godfather Hector Adonis, who tries to dissuade them of the path they are headed on toward banditry. Though Turi deeply respects and loves his godfather, he can not be dissuaded. They decide to free the prisoners of Montelepre, unjustly jailed in the nearby Bellampo Barracks. Turi narrowly escapes death at the hands of the Corporal Canio Silvestro whose pistol fails when he points it at Turi's head. Silvestro then, at the mercy of Guiliano, is spared in an act of mercy, and Turi frees the captives, including two men named Passatempo and Terranova, who join Turi's band. Guiliano at this point, is beginning to become famous in the news throughout Italy.

Not soon after daringly robbing the home of a local duke, Silvestro, disgraced by his military, asks to join Giuliano's band. Though suspecting him of being a spy, they allow him to join. They test his loyalty by asking him to execute Montelepre's Frisella, the barber, who has informed on Guiliano. Silvestro completes this task, proving his loyalty, and they attach a letter to his body that said "So die all who betray Guiliano".

Guiliano had now solidified his domination of the entire northwest corner of the island. He was legendary throughout Sicily, and children concluded their prayers at night saying, "...and please save Guiliano from the Carabinieri". Guiliano next orchestrated a kidnapping of Prince Ollorto. The prince was taken, and was treated with the utmost respect and dignity, and his ransom was paid by Don Croce Malo, who had normally been paid protection by the Prince. It was in this that Guiliano finally came into fierce opposition with Don Croce.

The assassination attempts on Guiliano increased, but he evaded them all, suspicious of all who came into contact with him. One of his would-be assassins is found to be Stefan Andolini, who is spared only through Abbot Manfredi, his father, to whom Guiliano owed a favor. Andolini joins Turi's band.

The book now fast-forwards back to 1950. In Trapani, Michael Corleone is met by Peter Clemenza, who is to help orchestrate Guiliano's escape. Michael meets Justina Ferra, Guiliano's fiancée, and Hector Adonis. Justina leaves for America. Hector informs Michael that Guiliano's elusive and damning Testament is hidden in a Black Madonna statue that Turi's mother gave him.

Back in 1947, Don Croce Malo was strongly aligned with the Christian Democratic party, and driven to keep that party in power, and to deny power to the up-and-coming Socialist parties that would surely strip him, and the other Mafia chiefs, of their power in Sicily. Don Croce along with Italy's Minister of Justice Franco Trezza, draw up plans to mount a great offensive against Guiliano, but intend to use these plans to blackmail Guiliano to use his influence to swing the upcoming election for the Christian Democrats. Guiliano, who was a man of God and hated the Socialists, ultimately accepts these terms, and helps the campaign across Western Sicily.

The 1947 election was a disaster for the Christian Democrats. The Socialists picked up many seats. A celebration was to take place on May Day to celebrate their victories in the Italian legislature by the people of the towns of Piani dei Greci and San Giuseppe Jato. The two towns would parade up mountain passes and converge at a plain called the Portella della Ginestra. Guiliano agreed to suppress this festival, giving his two leaders in this operation, Passatempo and Terranova, orders to "shoot over their heads". Passatempo's men end up shooting too low, and massacre many people, including many women and children.

The massacre proved devastating for Guiliano's image in Sicily. Guiliano discovers later that Passatempo had been paid off by Don Croce to shoot the paraders. Guiliano executed him while on his honeymoon with Justina. Guiliano can now feel that his time as a bandit is coming to an end. He stages one final daring move against the aristocracy and corrupt Mafia chiefs.

Six mafia chiefs had been summoned to the estate of Prince Ollorto, defending it from the local peasantry who desired to lease land from him, as a new Italian law had recently allowed them to. Guiliano and his band surrounded the estate and executed each one of these chiefs.

Guiliano then snuck into Palermo, and kidnapped a Cardinal, the highest Catholic authority in Sicily. The Church instantly paid the ransom.

The Minister of Justice Trezza could no longer hold back his plans to assemble a large force in Sicily to take down Guiliano. Part of the force comes to the island from the mainland, and immediately arrests Guiliano's parents and many citizens of Montelepre for conspiring with Turi. In retaliation, Turi robs the heavily armed and guarded pay truck that was responsible for paying all the Carabinieri stationed in Sicily. He is successful, and the Commander of the operation immediately calls for the rest of the reserve force to come to the mainland to combat Guiliano.

The plan to escort Guiliano to America is set into motion, and Aspanu Pisciotta meets with Michael Corleone. He gives the details on precisely where to intercept him and Guiliano. The next day, Clemenza and Michael head down the road toward Palermo, and are stopped by a huge traffic jam. They learn that up ahead Turi Guiliano has been killed by the Carabinieri. They move into town and eat at a cafe, hearing the news of Guiliano's death on the lips of every person in town. They are then discovered and arrested by the Inspector Velardi. They are later released after Don Croce Malo vouches for them, and organizes their release. They return to America.

Though the news is that he was killed by the Carabinieri, Giuliano's father, however swears a vendetta on Gaspare Pisciotta. Pisciotta betrayed Giuliano to Don Croce Malo and the Carabinieri because he was fearing his actions were becoming suicidal. He committed grievous offenses against the most powerful in Sicily and feared the end was near. It was Pisciotta who had killed Giuliano, shooting his hand off in a moment of nervousness, fearing that he would discover he betrayed him. Later, in prison, Pisciotta was poisoned by a joint effort of Don Croce Malo and Hector Adonis. Right after Aspanu's death, Adonis made his way into his cell and left a letter in Pisciotta's pocket reading, "So die all who betray Giuliano".

Michael returned home to the Corleone compound in Long Beach, New York. He met with his father in private, and the Don told him that they would not release Guiliano's testament for fear Guiliano's parents would be harmed in retaliation by the Italian government or its Mafia supporters. In this, Don Corleone teaches his son his first lesson: it is better to remain alive and live a fruitful life, than to be dead and a hero.

These are the principal characters that drive the plot of the story, many of whom are based on real-life figures.

In 1987, The Sicilian was adapted into a film, directed by Michael Cimino and starring Christopher Lambert as Salvatore Giuliano, however, owing to copyright issues, the characters of Michael Corleone and Clemenza were not included in this film adaptation. A number of character names were changed- for example Croce Malo became Masino Croce.

Behind the scenes Edit

Retrieved from "https://godfather.fandom.com/wiki/The_Sicilian?oldid=88264"
Community content is available under CC-BY-SA unless otherwise noted.