Start a Wiki
The Godfather 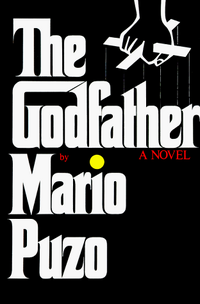 The Godfather is a crime novel written by Mario Puzo, originally published in 1969 by G. P. Putnam's Sons. It details the story of a fictitious Sicilian Mafia family based in New York City and headed by Don Vito Corleone, who became synonymous with the Italian Mafia.

The novel covers the years 1945 to 1955, and also provides the back story of Vito Corleone from early childhood to adulthood. The book introduced Italian criminal terms like consigliere, caporegime, Cosa Nostra, and omertà to an English-speaking audience.

It formed the basis for a 1972 film of the same name. Two film sequels, including new contributions by Puzo himself, were made in 1974 and 1990. The first and second films are widely considered to be two of the greatest films of all time.[1][2]

The cover was created by S. Neil Fujita whose design featured a large Gothic-style letter "G" with a long curl at the top emphasizing the first three letters of the title, accompanied by the hands of a puppeteer holding a set of strings over the "father" portion of the word.[3]

Some controversy surrounds the title of the book and its underworld implications. Although it is widely reported that Puzo was inspired to use "Godfather" as a designator for a Mafia leader from his experience as a reporter, the term The Godfather was first used in connection with the Mafia during Joe Valachi's testimony during the 1963 United States congressional hearing on organized crime.

He also has an informally adopted son, Tom Hagen, who became the Corleones' consigliere. Vito Corleone is also the godfather of a singer and movie star Johnny Fontane. The godfather referred to in the title is generally taken to be Vito. However, the story's central character is actually Michael. Its central theme follows that it is Michael's destiny to replace his father as the head of the family, despite his determination to lead a more Americanized life with his girlfriend (and eventual wife) Kay Adams.

The Corleone family is in fact a criminal organization with national influence, notably protection, extortion, gambling and union racketeering. Serving under the Don is his oldest son Santino, who serves as underboss. The operational side of the organization is headed by two caporegimes, Peter Clemenza and Salvatore Tessio.

The plot deals with a mob war fought between the Corleone family and the other four of the Five Families of New York. After Don Vito Corleone is shot by men working for drug dealer Virgil "The Turk" Sollozzo, his two sons, Santino and Michael must run the family business with the help of consigliere Tom Hagen and the two capos Peter Clemenza and Salvatore Tessio. When Sollozzo and an Irish police captain are murdered by Michael, the conflict escalates into a full scale war which results in Santino's death and Michael, despite his wishes, ascending to the head of the family. He slowly becomes more ruthless than his father, even killing his brother-in-law Carlo Rizzi, who played a part in Santino's murder. Also as the story progresses many of the minor characters, such as the Don's godson Johnny Fontane and his friend Nino Valenti, Sonny's former girlfriend Lucy Mancini, and Michael's bodyguard Al Neri, are expanded on and given their own subplots. Many of these subplots are not included in the movie. The novel culminates when Michael has his two main enemies, the novel's main antagonist, Emilio Barzini and a lesser but still severely important antagonist, Philip Tattaglia, assassinated. After the total elimination of the Tattaglia family and Barzini family, Michael sells all his business in New York with the intention of making the Corleone family a legitimate business in Las Vegas.

In 1972, a film adaptation of the novel was released, starring Marlon Brando as Don Vito Corleone, Al Pacino as Michael Corleone, and directed by Francis Ford Coppola. Mario Puzo assisted with writing the screenplay and with other production tasks. The film grossed approximately $269 million worldwide and won various awards, including three Academy Awards, five Golden Globes and one Grammy and is considered to be one of the greatest films of all time. The sequel, The Godfather Part II won six Oscars, and became the first sequel to win the Oscar for Best Picture.

The film is similar to the novel in most places, but leaves out some details, such as extended back stories for some characters. Some of these details were actually filmed, and were included in later versions such as The Godfather Saga. A subplot involving Johnny Fontane in Hollywood was not filmed. The biggest difference is that the novel includes a more upbeat ending than the film, in which Kay Corleone accepts Michael's decision to take over his father's business. The film, in contrast, ends with Kay's realization of Michael's ruthlessness, a theme that would develop in the second and third films, which are largely not based on the original novel. However, The Godfather Part II includes flashback sequences about the rise of Vito Corleone that are in the novel.

In 1983 Puzo's literary sequel to The Godfather was published. Entitled The Sicilian it chronicles the life of "Giuliano" (Salvatore Giuliano) but the Corleone family is featured heavily throughout, Michael Corleone in particular. Chronologically this story sits between Michael's exile to Sicily in 1950 to his return to the USA. For copyright reasons the Corleone family involvement was cut from the Michael Cimino movie adaption.

Continuing Puzo's habit, as seen in The Godfather, of featuring characters who are close analogues of real life events and public figures, Winegardner features in his two Godfather novels analogues of Joseph, John, and Robert Kennedy (the Shea family, in the novels) as well as an analogue for alleged organized crime figure Carlos Marcello (Carlo Tramonti). In The Godfather Returns, Winegardner also dramatizes the sweep of organized crime arrests that took place in Apalachin, New York, in 1957.

Winegardner uses all of the characters from the Puzo novels, and created a few of his own, most notably Nick Geraci, a Corleone caporegime whose role in the two sequel novels is as important as those of the Puzo-created characters. Winegardner further develops characters from the original novel, such as Fredo Corleone, Tom Hagen, and Johnny Fontane.

In 2012, a prequel, based on an unproduced screenplay by Mario Puzo, titled The Family Corleone was written by Ed Falco. It tells the story of how Vito Corleone rises to Don and how Santino Corleone and Tom Hagen enter the family business.

Main article: The Godfather: The Game

The video game company Electronic Arts released a video game adaptation of The Godfather on March 21, 2006. The player rises up the ranks in the Corleone family from Outsider to Don of New York City. Prior to his death, Marlon Brando provided some voice work for Vito, which was eventually deemed unusable in all but one instance and was dubbed over by a Brando impersonator. Francis Ford Coppola said in April 2005 that he was not informed of Paramount's decision to allow the game to be made and he did not approve of it.[4] Al Pacino also did not participate, and his likeness was replaced with a different depiction of Michael Corleone.

Large parts of the novel are based upon reality, notably the history of the Five Families. The novel also includes many allusions to real life mobsters and their associates; Johnny Fontane is based on Frank Sinatra and Moe Greene on Bugsy Siegel.[5][6]

Retrieved from "https://godfather.fandom.com/wiki/The_Godfather_(novel)?oldid=87854"
Community content is available under CC-BY-SA unless otherwise noted.