Start a Wiki
The Godfather: Five Families is a real-time strategy multiplayer game made by Kabam that is set in the Godfather universe. The new game has been licensed by Viacom's Paramount Pictures and takes place in New York City in 1935, ten years before the beginning of the first movie. Every player will be born into one of the Five Families featured in the films and must fight or plan their way to the top to become a don of a family.[1][2]

From the fact that in the beginning you have seven thugs, you seem to be the head of a gang. Your consigliere in the bottom right corner on the game screen gives you recommended jobs,or you can check your file for other jobs. You can attack other players, build up money, cement, steel, and food resources to build, train soldiers, or research. It can be played on a number of websites, such as Facebook and Kabam's official website. The highest ranking member of a family (the one with the most respect points) is the Don, the next ten are the underbosses, and the next twenty are capos. There are many other ranks to climb beforehand.

In the game, it is possible to create crews within families. The purpose of these crews are to assist other players by reinforcing them, or shipping supplies. There is also a crew Leaderboard that shows the rankings of the crews from each family. There are three ranks in the crews: 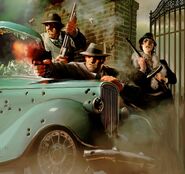 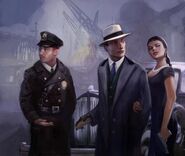 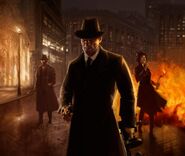 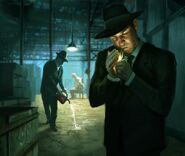 Barzini family artwork.
Add a photo to this gallery

Trailer of The Godfather: Five Families

Retrieved from "https://godfather.fandom.com/wiki/The_Godfather:_Five_Families?oldid=87656"
Community content is available under CC-BY-SA unless otherwise noted.