Start a Wiki
The Family Corleone 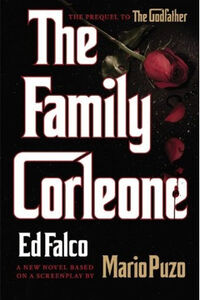 "It is my greatest wish to be thought of as a godfather, a man whose duty it is to do my friends any service, to help my friends out of any trouble- with advice, with money, with my own strength in men and influence- To everyone at this table, I say your enemies are my enemies, and your friends are my friends."
―Vito Corleone[src]

The Family Corleone is a novel by Ed Falco. It is based on an unproduced screenplay of Mario Puzo and is published by Grand Central Publishing. It is the prequel to Puzo's original novel The Godfather.

The novel, set in the later days of Prohibition, tells the story of how Vito Corleone rose through the criminal underworld to become the most powerful Don in New York. Also, it tells of Sonny Corleone's inauguration into the family business and Tom Hagen's graduation from being an adopted member of the Corleone family before becoming the consigliere. The novel also reveals how Luca Brasi first became associated with the Corleones, and introduces a number of new characters, including the crime boss Giuseppe Mariposa.

New York, 1933. The city and the nation are in the depths of the Great Depression. The crime families of New York have prospered in this time, but with the coming end of Prohibition, a battle is looming that will determine which organizations will rise and which will face a violent end.

For Vito Corleone, nothing is more important than his family's future. While his youngest children, Michael, Fredo, and Connie, are in school, unaware of their father's true occupation, and his adopted son Tom Hagen is a college student, he worries most about Sonny, his eldest child. Vito pushes Sonny to be a businessman, but Sonny - 17 years-old, impatient and reckless - wants something else: To follow in his father's footsteps and become a part of the real family business.

Reception for the book was mixed to positive,[1][2] with George De Stefano in The New York Journal of Books arguing that “Ed Falco deftly pulls off a feat of literary necromancy, bringing back to life one of the most iconic figures in American popular culture: Don Vito Corleone."[3] The Washington Post's Patrick Anderson wrote, "Falco has captured Puzo's rich prose style and eye for detail. If you want to read another installment of the Corleone story, The Family Corleone is a solid piece of work."[4] Kirkus Reviews gave it a positive review, calling it "A worthy addition to the lurid world of the Five Families."[5]

An audio book of The Family Corleone was produced by Hachette Audio, read by Bobby Cannavale.

Retrieved from "https://godfather.fandom.com/wiki/The_Family_Corleone?oldid=88266"
Community content is available under CC-BY-SA unless otherwise noted.