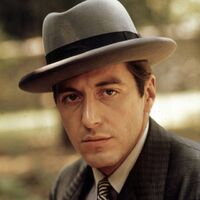 Michael initially wanted nothing to do with the Corleone's "family business", and enrolled at Dartmouth College in order to escape any potential involvement in crime. In truth, his father never wanted Michael to be involved in the family's criminal enterprise, and actually hoped he'd go into politics. After the United States' entry into World War II in 1941, he enlisted in the Marines (training under Sergeant Bradshaw) and fought in the Pacific, even though his father had expended great effort to wrangle a deferment for him. For his bravery in battle, Michael was awarded the Navy Cross, he was also featured in Life magazine in 1944. Michael was discharged as a Captain to recover from wounds- along with friend Hank Vogelsong - in 1945 (unbeknownst to him, the doctor treating him had been bribed by his father to exaggerate his injury in order to send him home). Returning to Dartmouth, he met a young teaching student, Kay Adams; the two fell in love. He assured Kay on numerous occasions that he wanted a more normal life, and wanted nothing at all to do with the Mafia. (Read more...)Archive
Retrieved from "https://godfather.fandom.com/wiki/Template:Mainpage_featured_article?oldid=89937"
Community content is available under CC-BY-SA unless otherwise noted.
FandomShop Newsletter GalaxyQuest