Sandra was born in Messina, Sicily, to unnamed American-born parents who returned to Sicily from New York City before her birth. She was raised speaking flawless English due to her schooling as well parents being born in the United States, as well as her father being raised in The Bronx, presumably by Sandra's grandmother, Signora Anita Colombo. Most of her family, including her mother and father, died before or during her early childhood due to an earthquake. She later spoke of Sicily as "beautiful" and described visiting the beaches of Lipari during her childhood vacations.[2]

Her grandmother, Anita, moved her to America at the age of 16 and they resided in the Bronx, where she had lived and met Don Corleone, who had close ties to the Colombo family after preventing Anita and her children from being evicted years ago. Sandra was neighbors with the Corleone family and became acquainted with the Don's children, including Sonny, who took a liking to her.[2]

In 1932, Sandra attended a neighborhood dinner hosted by the Corleones', along with the Gatto, Mancini, and Abbandando families. After Vito announced their plan to move to Long Island, Sonny remarked on her beauty and let the table know that he "wouldn't let her get away" while she became slightly embarrassed, but later amused as he was chastised by his father.[2]

"She won't let me get in the car with you, Sonny... you have a reputation."
"What reputation? I'm an angel, I swear. Ask my mother!"
"It was your mother who warned me about you!
"
―Sandra and Sonny[src]

Sonny and Sandra later had dinner at her grandmother's apartment, which she had previously prepared. Sandra remained relatively quiet throughout the meal due to the presence of her overbearing grandmother, but listened intently as he talked about a number of subjects regarding his life. They later sat alone together in the living room and shared their first kiss in Anita's absence.[2]

Unbeknownst to her, Sonny was carrying out a passionate affair with his then-best friend's sister, Eileen, the widow of Jimmy Gibson who was raising a five-year old daughter at the time. This continued until she ended things as his relationship with Sandra progressed, and his friendship with her brother grew more and more strained. He also was mentioned to be seeing a girl during his breaks at the garage and often eyed women in passing. As Sonny became more involved in the family business, Vito intervened and protesting his womanizing, revealing that Sandra was in love with him. Sonny remarked that she was too young for marriage, which caused his father to insist that if he saw her again without proper intentions and broke her heart, he would no longer have any respect for him.[2]

Sandra continued to see him, meeting his friend Cork and even permitted to go to outings in the nearby cafe, within Anita's line of sight. She gradually opened up to him and her laugh was noted as being 'loud and hearty' and her eyes having a sparkle as she grew out of shyness. She revealed that she knew of his womanizing ways from his mother, Carmela, which was part of the reason Anita watched them so closely.[2]

After Sandra turned 17, Sonny pressed for her to convince her grandmother to allow them to go out to dinner. She vehemently refused many times, which lead to Sonny buying her a gown so they could go to a classy nightclub on their own. While pleading with Anita to let him take her out for the night, he was forced to reveal that he intended to propose to her that night and pledged to protect her family. Sandra accepted his proposal with a smile, and they subsequently were allowed to have their first 'proper' outing in the company and entertainment of Sonny's godbrother, Johnny Fontane, and his friend Nino.[2]

Only hours after marked the start of the Olive Oil War, which Sonny was now embroiled in due to his official ties with the family business. Sandra later met both Tessio and Clemenza when Sonny visited her to reassure her before the bloodshed broke out. He promised her that she shouldn't worry and comforted her while she cried, due to her realization of Sonny's true position. He kissed her goodbye and asked her not to read the papers, which printed "nothing but lies" about his family. After he left, she was unable to return to her apartment until she had mulled over their conversation multiple times and assured herself that his words were true.[2]

After Sonny made his bones by killing Cork, the Corleone family reunited at their newfound Long Island residence alongside their friends and neighbors. Sandra, during the time of their engagement, was faced by numerous sexual jokes concerning the couple that would continue throughout their marriage. Sandra also developed close relationships with Carmela Corleone and Tom Hagen as they helped Sonny during his recovery. Sandra also became close with her female-in-laws as well as Don Corleone himself (later addressing him as "Pa") and his sons.[2]

She married Sonny in 1935, the reception taking place at the Corleone Compound in Long Island. Multiple guests of Vito's invitation were in attendance, including Johnny Fontane and many of Sandra's remaining family members. Her wedding dress was crafted by her mother-in-law, Carmela.[2] They subsequently moved into the family compound in an allotted house for the eldest son.[3]

Despite her apparent fear and discomfort at his appendage. Sandra bore Sonny four children, Francesca, Kathryn, Frank and Santino Jr, and the couple shared a loving, supportive relationship. It is implied that Sandra tolerates Sonny's unfaithfulness due to her own lack of willingness for the marriage-bed due to his large endowment, albeit not without frustration and worry. However, Sonny is described to be a caring husband and father. During her marriage, she grew more bold in her speech as well as sociable and joking in her personality and at times, slightly vulgar, due to her apparent freedom and closeness to her newfound family.[3]

During Vito Corleone's birthday party in 1941, she is informed by Francesca and Kathryn that Sonny tried to fight his brother Michael over Michael joining the Marine Corps after the Pearl Harbor attacks that day, though Salvatore Tessio stops Sonny.[4]

Ten years later, in 1945, Sandra attended the wedding of her sister-in-law, Connie Corleone, and helped with meal preparations before and during the reception. Sandra comforted Sonny and the rest of her family after the attempted assassination of her father-in-law, which began the start of the Five Families War. She looked after the children as well as Carmela during the Don's recovery and Michael's absence. Weeks later, Connie called Sonny in distress at Carlo's beating and Sonny flew into a protective rage. Sandra went after him as he ran out of the house, and was one of the last people to see him before he was fatally shot on the causeway due to Carlo's betrayal.[3]

The Corleones later held a service for Sonny as she mourned his death with the rest of the family. She and her four children later moved to Hollywood, Florida, with help from provisions left in Sonny's will as well as resources provided by the family.[5]

Sandra never remarried, but became closely involved with Stan Jablonsky, a liquor salesman and friend of the family. She also maintained close relationship with her sister-in-law Theresa Hagen, who provided her with companionship after her daughters left to college. Both also contributed to various parts of real estate in the family's name. Upon her twin daughters' leaving to go to college, Sandra cried that her husband wasn't here to see it, and spoke of how proud and emotional he would have been. Francesca was skeptical, but she revealed that Sonny would often grow emotional at films at "corny old Italian songs".[5]

Her twin daughters were close in childhood, but Sandra noted that they grew different from one another as they grew up. Kathryn became more familiarized with the true family history and even knew about Michael's first wife, Apollonia. Francesca, on the other hand, sought a more normal life and frequently read French instead of Italian, evening considering changing her surname to something more American-friendly. She advised Francesca to be cautious and mature at a respected pace, while Francesca secretly dismissed the request, remembering that her mother had been pregnant at her age.[5]

Even after her husband's death, Sandra remained close to the Corleones. Sandra was present at the funeral of Don Vito Corleone, the baptism of Connie's eldest son, Michael Rizzi[3], as well as the first communion of her nephew, Anthony Corleone, where she advised Francesca to seek Michael's blessing before marrying Gardner Shaw.[4] However, they would later separate, and Francesca eventually settled with longtime family friend of her parents', Johnny Fontane and became closely involved with the family's charitable efforts in the Vito Corleone Foundation.[6] She was also present at Mama Corleone's funeral alongside Rocco Lampone.[4] 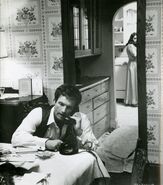 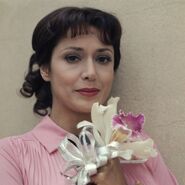 Add a photo to this gallery

Retrieved from "https://godfather.fandom.com/wiki/Sandra_Corleone?oldid=91423"
Community content is available under CC-BY-SA unless otherwise noted.