The Godfather Wiki
Register
Don't have an account?
Sign In
Advertisement
in: Assassins, Deceased, Deceased (real world),
and 3 more

"Who says there is no fire from Heaven in Sicily?"
―Salvatore Giuliano[src]

Salvatore "Turridu" Giuliano, Jr. was a Sicilian bandit who has been been mythologised during his life and after his death.

Giuliano was born in Montelepre, a rural village in western Sicily, as the fourth and youngest child of Salvatore Giuliano, Sr. and Maria Lombardo. His parents were landed peasants who had spent some of their earlier lives in the United States where they had earned the money to buy their farmland.[1]

Giuliano rose to prominence in the disorder which followed the Allied invasion of Sicily in 1943. In September of that year, Giuliano became an outlaw after shooting and killing a police officer who tried to arrest him for black-market food smuggling when 70% of Sicily's food supply was provided by the black market. He maintained a band of subordinates, including his "cousin" and lieutenant Gaspare Pisciotta, and two local bandit chieftains, Terranova and Passatempo, who he rescued from the Bellampo barracks. Shortly after this, they robbed a military train and Giuliano gave his cut to the people.[1]

The widespread international press coverage he attracted made him an embarrassment to the Italian government, and throughout his banditry a large police force was deployed against him. At this time, he married Justina Ferra, a young peasant girl.[1] (in The Sicilian film she is named Giovanna Ferra)

Michael Corleone was assigned by his father, Don Vito, to bring Giuliano with him to the United States. However, Giuliano was killed in 1950 by the hand of his lieutenant, Gaspare Pisciotta, after he was persuaded by Don Croce Malo. His corpse was then laid on the street in a nearby village and sprayed with bullets to make it seem like he was killed by the military.[1]

Giuliano is commonly compared to the legend of Robin Hood, due to stories pertaining to him helping the poor villagers in his area by taking from the rich.

Salvatore Giuliano is the main character in the novel The Sicilian. In the film adaptation he is played by Christopher Lambert. 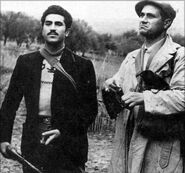 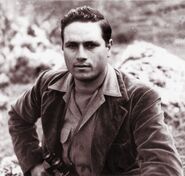