Lupara is an Italian word used to refer to a sawn-off shotgun of the break-open type. It is traditionally associated with Cosa Nostra, the Italian organized crime group dominant in Sicily for their use of it in vendettas.

The shortened barrel (or barrels) of a lupara lend themselves to easier handling in wooded areas, or to easier concealment and indoor employment in urban areas. The lack of choke contributes to a wider spread of shot when the weapon is fired.

Michael Corleone's bodyguards in Sicily, Fabrizio and Calò, were known to carry Lupara shotguns with them while traveling through the Sicilian countryside.

The lupara is one of the oldest Italian firearms originating in Sicily. The word 'lupara' means literally 'for the wolf', reflecting its traditional use in wolf hunting.

From the word lupara comes the Italian expression lupara bianca (white lupara), a term especially used by journalists to refer to a mafia-style slaying in which the victim's body is deliberately hidden. 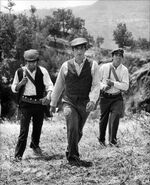