"Now you listen to me, you smooth talking son-of-a-bitch. Let me lay it on the line for you and your boss, whoever he is. Johnny Fontane will never get that movie. I don't care how many dago guinea wop greaseball goombas come outta the woodwork."
―Jack Woltz[src]

Jack Woltz was a movie producer from Hollywood.

Woltz was a Jewish movie producer who had achieved mild success in the film industry, having come up from nothing, rolling barrels with his father in Hell's Kitchen during the early 1900s. He eventually went on to found Woltz International Pictures, which grew into one of the biggest studios in Hollywood.

During World War II he became the White House's propaganda adviser, obtaining a large government contract as well as political contacts in the process, as well as an acquaintance with J. Edgar Hoover. It is also revealed that he was a pedophile who routinely molested young girls who auditioned for his movies, as well as the daughters of some of his actresses. To discourage rumors, he married a series of actresses, as well as taking etiquette lessons from a British butler and dressing lessons from a British valet.

By the 1940s, Woltz's latest hobby became racehorse breeding, and he had purchased the British Triple-Crown winning racehorse Khartoum for $600,000, planning to retire the champion from racing and put him to stud for Woltz's private stables. Woltz was very fond of the stallion, and spent a fortune hiring expert breeders, vets, and even armed P.I.'s to guard Khartoum's stable.

Dealings with the Corleones

"You don't understand. Johnny Fontane never gets that movie. That part is perfect for him; it'll make him a big star. And I'm gonna run him out of the business, and let me tell you why. Johnny Fontane ruined one of Woltz International's most valuable proteges. For five years we had her under training. Singing lessons; acting lessons, dancing lessons. I spent hundreds of thousands of dollars on her. I was gonna make her a big star! And let me be even more frank, just to show you that I'm not a hard-hearted man, and it's not all dollars and cents. She was beautiful; she was young, she was innocent. She was the greatest piece of ass I ever had, and I had'em all over the world! And then Johnny Fontane comes along with his olive-oil voice, and guinea charm. And she runs off. She threw it all away just to make me look ridiculous! And a man in my position can't afford to be made to look ridiculous! Now you get the hell outta here! And if that goombah tries any rough stuff, you tell him I ain't no band leader! Yeah, I heard that story."
―Jack Woltz[src]

In 1945, Woltz had bought the rights to film a war movie from a best selling novel. Woltz refuses to cast the singer/actor Johnny Fontane in his movie due to his jealousy over Fontane's role in the break up of one of Woltz's previous relationships. Woltz unsuccessfully tried to blacklist Johnny as a communist, but resorted to barring him from a movie role that would have restored Fontane's career. Fontane would have been perfect for the role, and probably have been a contender for the Best Actor Academy Award. However, Woltz, guided by revenge, turns Johnny down for the role in the hopes of destroying Johnny's career. Fontane asks Don Vito Corleone, who is his godfather, as well as the head of the Corleone family, to lean on Woltz. Corleone sends his consigliere, Tom Hagen, to Hollywood make Woltz "an offer he can't refuse". When Hagen introduces himself and pitches the offer, he hears "Woltz is listening", which gives the impression of starting off on the right foot.

The deal was very generous: the Corleone family would make the unions under their control to stay away from Woltz Pictures. This would be a benefit, as one of Woltz's biggest stars had gotten addicted to heroin. The Corleones would order the union to force the actor to sober up by cutting off his heroin supply. Even better for Woltz was that Vito Corleone was willing to finance the entire production of his upcoming war movie should Fontane be cast. Thinking Hagen is "some punk that Fontane hired", Woltz initially becomes enraged and resorts to truculent behavior and racial slurs. Woltz assaults Hagen with a series of anti-Italian racial slurs, then refuses to bargain. Later, after finding out Hagen worked for the Corleones, he appeared more eager to listen, trying to renegotiate to gain help with the union problems, but in the end he still refused to cast Fontane simply out of spite. Woltz even threatened to use his connections to the White House and the F.B.I. if the Corleones tried any "rough stuff". By contrast, Hagen is able to remain calm and professional during negotiation, whereas Woltz is hotheaded, stubborn, and impulsive.

Hagen returned to New York to report to Don Corleone, and told the Don that Woltz was not "Sicilian", i.e., Woltz was not willing to risk everything he had, including his life, just to settle a petty vendetta. Don Corleone decided to make Woltz realize this as well.

One morning soon after, Woltz woke up to find himself and his bedsheets covered in blood. He pulled back the covers to find Khartoum's severed head in his bed. Woltz realized that he was dealing with people who didn't think twice before butchering a half-million dollar horse and could easily do the same to him. Terrified, Woltz relented and gave Fontane the role in his picture.

When Fontane was nominated for an Academy Award for his role in the film, a spiteful Woltz bribed or threatened nearly everyone in Hollywood to keep him from winning. He was again thwarted by the Corleone family, however, and Fontane won. Years later, Johnny Fontane retired from acting and focused solely on being a producer. The Corleones loaned him money to begin his own movie studio, which eventually became so reputable it proved a formidable rival to Woltz Pictures.

Several years later, Woltz would again be dogged by rumors of pedophilia. To squelch this bad gossip he married former starlet Vickie Adair. She promptly squandered his fortune on lavish parties with hipsters and surfers. He survived only by quietly selling of assets and land from the back of his movie lot.[2]

In 1962, the Corleone family needed to negotiate with Woltz again in order to remove the heat they were receiving from President James Shea. Woltz supplied them with film of Shea having sex with Marguerite Duvall that could be used for blackmail. Because of his help the Corleones secured him financially and his studio again became successful. He is considered a Hollywood legend.[3]

Woltz is a hard, ruthless figure who enjoys the finer things in life. He was toughened up during his early days in Hell's Kitchen, Manhattan. Despite this physical toughness he was also intelligent and cunning, and knew how to use his connections to his advantage.

However he was also an arrogant pedophile and megalomaniac who overestimated his power compared with that of Vito Corleone, who as a Sicilian was willing to die for a matter of honor, unlike Woltz. Woltz was a petty and embittered old man with an inflated ego and little social grace. He was often vulgar in his speech and had little respect for anyone he deemed beneath him.

He was portrayed by John Marley in the film and voiced by Doug Abrahams in the game. Although Woltz in the game parrots everything he said in the movie, the producers elected to hire a voice actor, likely because they felt the original voice tracks may have been aging.

Jack Woltz is believed to be based on Harry Cohn, the president and founder of Columbia Pictures who had cast Frank Sinatra in From Here to Eternity.[4][5] Moe Howard of the Three Stooges recalled that Cohn was "a real Jekyll-and-Hyde-type of guy, socially, he could be very charming". Cohn had ties to organized crime. New Jersey mob boss Longy Zwillman, a longtime friend, lent Cohn the money to buy complete control of Columbia.

In The Godfather's Revenge Woltz states that he judges films by how many times he needs to go to the bathroom in their duration, something that was attributed to Jack Warner as well as to director Alfred Hitchcock. 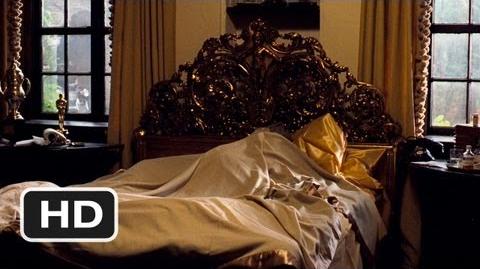