"If I could only live to see it, to be there with you. What I wouldn't give for twenty more years! Here we are, protected, free to make our profits without Kefauver, the goddamn Justice Department and the F.B.I. ninety miles away, in partnership with a friendly government. Ninety miles! It's nothing! Just one small step, looking for a man who wants to be President of the United States, and having the cash to make it possible. Michael, we're bigger than U.S. Steel."
―Hyman Roth to Michael Corleone[src]

Hyman Roth (né Suchowsky) was an investor and a business partner of Vito Corleone and former enforcer in Corleone family, and later a partner of his son Michael.

Born as Hyman Suchowsky, Hyman Roth spent his early life in Hell's Kitchen, New York. In the early 1920s, while working as a car mechanic, he was noticed by Peter Clemenza, who called him "Johnny Lips". Clemenza introduced him to Vito Corleone who suggested to change his name. When Vito asked who he admired, Suchowsky told him Arnold Rothstein for fixing the World Series. Vito thus gave him the name Hyman Roth. Roth had one younger brother, Sam and a wife named Marcia.

Roth worked diligently for the Corleone family during Prohibition, and was a close friend and ally of Moe Greene, the "inventor" of Las Vegas. Roth, as well as Don Corleone, both got their starts working together running molasses out of Cuba. It is suggested, however, that Vito never fully trusted Roth, nor did many of his associates, including Johnny Ola.

Roth had very few men under his control over the years, which helped him keep under the radar of the authorities for many years. Although Roth himself had little in the way of fighting power, this was offset by his numerous business dealings, where his partners would provide him with all the muscle he needed. His ability to generate such enormous profits from his plans for him and his partners gave him immense influence and a sort of political invincibility in the underworld: nearly all of Roth's most bitter rivals realized he was far too valuable an asset to lose, and his partners were determined to protect their moneymaker from the few who didn't.

By the late 1950s, Roth was based in Miami and lived like a typically quiet, middle-class Jewish man with his wife Marcia, approaching old age — though in reality he is a multi-millionaire and powerful crime boss. His right hand man is the Sicilian Johnny Ola. Roth, though in ill health, is about to enter into an extraordinarily profitable business partnership with the corrupt Cuban government of Fulgencio Batista, but is thwarted by Fidel Castro’s Communist revolution. He also had dealings with the Central Intelligence Agency. At about this time, Roth manipulates Michael's brother Fredo into giving him information he uses to make an attempt on Michael's life in order to avenge his friend Moe Greene's murder.

Michael quickly realizes that Roth was behind the assassination attempt. However, remembering his father's advice to "keep your friends close and your enemies closer", he decides to make Roth think they still have a good business relationship before killing him. He also suspects Roth had the help of a mole in the Corleone family, and wants to buy time to smoke him out, too.

During the last night of Batista's leadership, Michael orders Roth killed, telling Fredo, "Hyman Roth will never see the New Year." After ordering the murder of Johnny Ola in the same night, Michael orders his bodyguard, Bussetta, to kill Roth. Roth is ill and lying in bed when Bussetta sneaks in and tries to suffocate Roth with a pillow. However, this murder is foiled, as a squad of Batista's soldiers enter the hospital ward. They ask no questions, simply aiming their weapons at Busetta and opening fire. Bussetta died almost instantly. As Michael later learns that Fredo betrayed him and he had earlier shared the assassination plans with Fredo, it could be surmised that Fredo warned Cuban government officials, who ordered soldiers to guard Roth.

Shortly before the Cuban fiasco, the Senate began hearings on the impact of organized crime. The subcommittee's lawyer, Questadt, was on Roth's payroll, and alerted Roth. Seeing a chance to eliminate Michael from the scene, Roth had the Rosato brothers try to kill Pentangeli and make him think that they did so on orders from Michael. Pentangeli tells the FBI that Michael is really a powerful Mafia leader who controls all of the gambling in North America, and has ordered dozens of murders. Pentangeli is considered very credible, since as a caporegime and there is no insulation between himself and Michael. Fredo knew about Roth's involvement in the hearing all along, and only told Michael just days before he was due to testify, prompting Michael to banish him from the family. Realizing that Pentangeli's testimony could send him to prison, Michael flies in Pentangeli's brother, Vincenzo, to remind him not to break his blood oath.

"I'm a retired investor living on a pension. I came home to vote in the Presidential Election because they wouldn't give me an absentee ballot."
―Hyman Roth[src]

By the end of the winter, Roth publicly states that he wishes to retire and live the twilight of his life in Israel — a sign that he has given up his feud against the Corleones. But Michael is not satisfied yet. Roth's request to move to Israel under the Law of Return is rejected by the Israeli High Court, reportedly due to his criminal ties. When Michael finds this out, he puts a contract on Roth. Roth arrives at the airport and prepares to be taken into Federal Custody in the U.S. Minutes after getting off the plane, he is shot point-blank by Corleone caporegime Rocco Lampone, who was posing as a reporter. Rocco was then shot and killed by federal officers as he was running away.

In the video game

"This is the business we've chosen. It was only business, Dominic."
―Hyman Roth[src]

In the video game, Roth's birthday party in Havana takes place on the same day as the overthrow of Batista's government by Fidel Castro's communists. This event throws much of the criminal underworld in turmoil, and Rico Granados begins to move in on Roth's territory. In order to defend his empire, Roth hires Dominic Corleone to take out Granados. Roth also manipulates Michael's brother Fredo to ruin his business connections with the Mangano family, who has recently formed an alliance with Michael's right hand man, Dominic.

Roth's manipulative tendencies are seen even more here, he uses both Agent Henry Mitchell and crime boss Esteban Almeida to further his dream of achieving a monopoly in Cuba. Rocco Lampone does not feature here, instead it is Dominic who kills Roth in whatever way he sees fit. 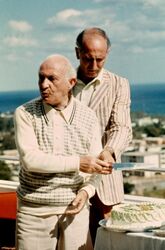