Helmut Berger is an Austrian actor.

Helmut Berger was initially a hotelier before he took up acting lessons at the age of eighteen. He is most famous for his work with Luchino Visconti, particularly in his performance as Ludwig II of Bavaria in Ludwig, for which he received a European Oscar.

He appears primarily in European cinema, but has also made an impact on the world stage in films such as The Godfather Part III and Iron Cross. 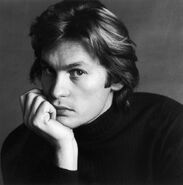 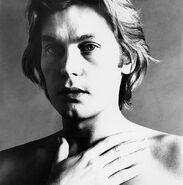 Helmut Berger in 1973
Add a photo to this gallery

Retrieved from "https://godfather.fandom.com/wiki/Helmut_Berger?oldid=89510"
Community content is available under CC-BY-SA unless otherwise noted.