The Godfather Wiki
Register
Don't have an account?
Sign In
Advertisement
in: Deceased, Deceased (real world), Sicilian Mafia,
and 2 more

Gaspare "Aspanu" Pisciotta was a companion and childhood friend of the Sicilian bandit Salvatore Giuliano, and considered to be the co-leader of his gang.

Pisciotta was a cousin and the best friend of Giuliano. They lived in Montelepre and were close friends since they were children. He accompanied Giuliano when his friend was shot by carabinieri (Italian military police) as they attempted to smuggle food. He survived the shootout and brought Giuliano to his friend Abbot Manfredi who Giuliano stayed with while he recovered.

The path towards crime

After Manfredi helped Giuliano, the two were warned that the carabinieri were on their trail, and Giuliano had to leave the monastery. They fled to the mountains where they lived from then on. They were visited Giuliano's godfather Hector Adonis, who warned them against the path they were taking. They became bandits anyways, and Giuliano soon became famous throughout Italy.

While Pisciotta was officially the co-leader of Giuliano's band, this was not the case in reality. While Pisciotta was the man Giuliano trusted the most and was his right hand man, Pisciotta's opinions were always subordinate to Giuliano, and Giuliano sometimes went against them. Pisciotta eventually came to resent this. Pisciotta was, unlike Giuliano, irresponsible with women, sleeping with unmarried girls despite Giuliano's orders against this. Pisciotta even tells Michael Corleone that Giuliano once tied him to a tree and whipped him after complaints were made by the father of an unmarried girl he impregnated in Partinico. He also spent his money from banditry lavishly on himself and his family, and never believed in freeing Sicily like Giuliano. He also became increasingly paranoid that Giuliano would kill him for these faults.

After their band's power finally began to fall due to the presence of Colonel Luca's army, and Giuliano was forced to make preparations to flee to America, Pisciotta was convinced by Don Croce to betray his friend. Pisciotta told Don Croce where he was meeting with Giuliano, who then told Colonel Luca. Pisciotta became suicidal and even more paranoid after officially betraying Giuliano. He dreads what will happen if anyone realizes his betrayal. When he went to meet his friend, Giuliano, suspecting nothing, invited him to sit with him and talk. Pisciotta, fearing Giuliano accusing him of betrayal but also fearing Giuliano's love and trust in him more, shoots Giuliano to death in a moment of nervousness. Giuliano dies before he can understand his best friend's betrayal.

Giuliano's father declared a vendetta on Pisciotta after finding out about his betrayal. A joint effort of Don Croce Malo and Hector Adonis has him poisoned while he is imprisoned for his banditry. After his death, Adonis made his way into his cell and left a letter in Pisciotta's pocket reading, "So die all who betray Guiliano". 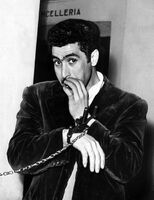 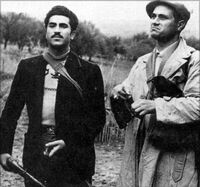