"Young man, I hear you and your friends are stealing goods. But you don't even send a dress to my house. No respect! You know I've got three daughters. This is my neighborhood. You and your friends should show me some respect. You should let me wet my beak a little... Tell your friends I don't want a lot. Just enough to wet my beak."
―Don Fanucci[src]

Fanucci was a freelance Black Hand extortionist who operated in Hell's Kitchen, the neighborhood in which the young Vito Corleone lived at the turn of the century. He was believed to have connections with notorious gangster Maranzalla, which made him, in a sense 'untouchable'. Fanucci demanded "protection" money from neighborhood businesses, and did not confine his demands to non-Sicilians, which is considered a sign of disrespect in the Mafia. Corleone witnessed Fanucci threaten to disfigure a young girl when her father refused to pay him. He also indirectly lost his own job when Fanucci demanded that his friend Genco Abbandando's father provide employment for Fanucci's nephew, Sandiago.

Corleone watched Fanucci wander the streets without obvious protection, but took no immediate action, even after he saw several street toughs attack the man and cut his throat. The wound was not fatal and Vito notes as Fanucci runs away, that he holds his fedora under his throat to prevent the blood from staining his signature cream-colored suit.

Fanucci got wind that Vito had taken part in several robberies with Pete Clemenza and Salvatore Tessio. He collared Vito and threatened to turn them into the police unless they "wet his beak" or gave him a cut of their illegal profits, specifically by giving some of the dresses they had stolen to his three daughters. Vito saw a chance to eliminate Fanucci and take his place.

When Vito told Clemenza and Tessio about Fanucci's demands, Clemenza and Tessio initially wanted to give in. However, Vito, suspecting that Fanucci didn't have any muscle behind him, persuaded them to only give Fanucci $100 of the $600 that he demanded.

When Vito met with Fanucci, he offered only a fraction of the amount demanded - $100 of the $600 Fanucci expected. Fanucci was impressed with Vito's courage, and offered him work. Vito interpreted his ability to low-ball Fanucci as a sign of the latter's weakness, thus confirming his suspicion of Fanucci's vulnerability.

Vito followed Fanucci to his apartment down the street, and prepared to execute him. He grabbed a gun he'd hidden in a chimney, wrapped in a towel as a makeshift silencer to muffle its report. When Fanucci arrived, Vito shot him once in the chest. Before Fanucci could react, Vito shot him in the cheek, terribly wounding him. He then fired a killshot into Fanucci's mouth. The sound of the gunshots was drowned out by loud music being played and fireworks being launched during a nearby parade. After the hit, Vito retrieved the money Fanucci had taken earlier in the day and then destroyed the gun, dropping the pieces of the gun down pipes of the apartment building. Vito then took over Little Italy and treated it with far more respect than Fanucci had, for which he was respected by the local people.

It was discovered, due to lack of interest or reprisals following Fanucci's demise that he had, in fact, fabricated the tales of his connections, or, at the very least, exaggerated them. A previous indication of this was that gangster/bookmaker Frank Pignattaro never paid tribute to Fanucci.

Don Fanucci is believed to be based on Ignazio Lupo, also known as Lupo the Wolf, a Black Hand leader in Little Italy during the early 1900s.[2] 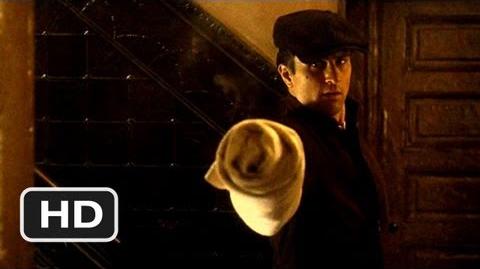