Corleone victory
The Corleone-Ciccio conflict started as a dispute between the Andolini family and Don Ciccio's clan, culminating in the deaths of Antonio Andolini and his wife and son. It ended in the death of Don Ciccio, killed by Andolini's surviving son Vito Corleone, as an act of revenge.

In 1901, the don of the village of Corleone, Don Ciccio, was defied by a local villager named Antonio Andolini, who refused to pay tribute. In response, Don Ciccio had his bodyguards Mosca and Strollo execute Antonio, leaving behind his sons Paolo and Vito to face him, along with their mother. Paolo swore revenge, and bided his time until he was older. However, at the funeral procession, Don Ciccio ordered hitmen to murder Paolo, and they succeeded. A day later, Signora Andolini begged for Don Ciccio not to hurt young Vito, since he was too weak and would not fight him. But she was killed, leaving Vito alone. He fled the gunmen and was harbored by some family friends, despite Mosca and Strollo informing all of the citizens of Corleone that they would be punished if they were caught harboring him.

Vito emigrated to the United States of America to evade death, but when he came of age, he reentered Sicily to "gain Don Ciccio's blessing" for the creation of the Genco Pura Olive Oil Company, along with his ally Tommasino. Instead, during his visit he killed Mosca and Strollo individually before heading to kill Don Ciccio, who was very old at the time. He cut his chest up to his neck after revealing that he was Antonio Andolini's son, and escaped. Tommasino was wounded by one of Don Ciccio's bodyguards, but remained alive and the Don Ciccio regime collapsed. Tommasino gained control of Corleone, while Vito returned to New York and his family that he had founded.

Tommasino is crippled.
Add a photo to this gallery 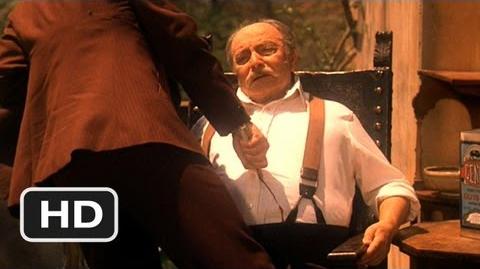 Retrieved from "https://godfather.fandom.com/wiki/Corleone-Ciccio_conflict?oldid=74810"
Community content is available under CC-BY-SA unless otherwise noted.