"Michael, I hated you for so many years. I think that I did things to myself, to hurt myself so that you'd know - that I could hurt you. You were just being strong for all of us the way Papa was. And I forgive you. Can't you forgive Fredo? He's so sweet and helpless without you. You need me, Michael. I want to take care of you now."
―Connie Corleone[src]

Constanzia "Connie" Corleone is the daughter of Don Vito Corleone and Carmela Corleone, and the younger sister of Sonny, Fredo, Michael, and Tom Hagen.

Connie is the youngest child and only daughter of Vito and Carmela Corleone. She was a twin, but her other died in the womb, something that only the closest members of the Corleone family knew about, as well as her godfather, Don Osvaldo Altobello. Being the only girl in her family, Connie was spoiled, having her own pony at a young age. She was one of the few people able to convince her father, Don Vito, of any other course of action other than his own, as seen when she requested for Michael to have corrective surgery to fix his broken jaw.

She was introduced to Carlo Rizzi, a former laborer originally from Nevada and friend of her brother Sonny, during a surprise birthday party for Vito in December 1941. She married him at a lavish old-style Sicilian ceremony in 1945. Carlo and Connie agreed to the ceremony due to her father's displeasure in her choice of groom (he was not only a hoodlum, but half-northern Italian). They moved into an apartment in Hell's Kitchen.

Once they were married, Carlo began to mistreat her, stealing the marriage purse and spending it on frivolities (booze, drugs and prostitutes), as well as beating her regularly. Connie begged for her father to intervene, but he coldly refused to help, seemingly to punish Connie. (In truth, Vito is upset at how Connie is being treated, but Italian tradition forbids a father — even one as powerful as Vito — from interfering in his daughter's marriage.) While Vito sent Sally Rags to keep an eye on the small sports book Carlo ran, he took no action to reprimand his son-in-law. However, Sonny, Fredo, Michael and Tom all grew to resent Carlo for how he treated their sister, especially Sonny, who became physically violent with Carlo.

After one particularly violent beating, during which Connie was pregnant with her son Victor, Sonny flew off in a rage and beat Carlo severely in the street near his bookmaking offices. Sonny actually let up on Carlo after it was apparent that he wouldn't defend himself. Only the hand of the Don had prevented him from doing so earlier, as Vito was still bed-ridden at this time.

Several months later, Connie took a phone call from one of Carlo's girlfriends who was canceling a date with Carlo that evening, which prompted a violent argument. After Carlo gave her a severe beating, Connie called Sonny in a state of terror and, completely enraged, he left the Corleone mall to find Carlo. While en route, he was ambushed and assassinated at the toll booth at the Jones Beach Causeway. It was later found out that this had been a set-up: Carlo had been paid by Emilio Barzini, the Corleones' largest rival, to force Sonny out into the open by beating Connie.

Following Sonny's death, Carlo became much more reserved and stopped abusing her, and the two of them had a second child, named Michael after his godfather, Connie's brother. After standing as godfather, Michael took revenge for Sonny by having Carlo killed by Peter Clemenza. When Connie found out about it, she flew into a rage and denounced Michael, though at the time she was likely unaware of his role in Sonny's death. She hated Michael for several years afterward for having her husband killed.

She had two sons by Rizzi, Victor and Michael Francis.

Two months after Carlo's death, Connie began a series of meaningless affairs and marriages just to spite Michael and deal with her grief over the murder of her husband, such as her engagements to both Ed Federici and Merle Johnson, even borrowing money and abandoning her two children. She was married and divorced at least once before 1958. However, she came back to the family after their mother Carmela's death, as well as to help Michael take care of Anthony and Mary after Michael and Kay split up. Connie helped Kay see her children in secret on at least one occasion. At this time, Fredo had been outcast from the family due to his involvement with Hyman Roth and Johnny Ola. Connie convinced Michael to accept him again, but this was only a front, and he ordered Fredo's death soon afterwards. Connie seemed to accept the story that Fredo had drowned out on Lake Tahoe.

"Michael, now they'll fear you."
"Maybe they should fear you."
―Connie and Michael Corleone[src]

By the 1970s, Connie had become involved in the family business, almost serving as a consigliere in her own right. She was instrumental in persuading Michael to take his nephew Vincent under his wing and groom him as the new Don. It was Connie along with Al Neri who gave Vincent the go-ahead for executing Joey Zasa, much to Michael's initial surprise and anger.

Despite her own and Neri's defiance, she remained close to Michael, comforting him about his remorse over the death of Fredo. She also ensured his protection, having Vincent hire infamous mercenaries The Twins to keep him safe. Connie was present at Vincent's informal promotion to Don, and at Anthony's debut performance at the Teatro Massimo in Palermo.

Connie was entrusted with the murder of her godfather Don Altobello, and supplied him with poisoned cannoli. Presented with the cannoli as a present before the opera, Don Altobello was astonished to see Connie remembered his favorites after all these years. Upon looking over the desserts, he chose one and offered it to Connie. She took it and gave its poison the smallest taste, before passing it back to her godfather. Don Altobello smiled and took a nice bite, before returning it to the gift box Connie had used for the cannolis. He took them along to the opera that evening. During the performance, she observed his passing through her opera binoculars. She appeared regretful for his assassination.

Connie was also present at the shooting incident on the main steps of the theatre after the performance that resulted in the wounding of Michael and the death of her niece, Mary, which horrified and saddened Connie.

Details about Connie's life after the murder of Mary Corleone are unknown. While it is known that Michael dies at age 77 in 1997, there are no details on Connie's later years. Being the last of Vito and Carmela Corleone's children, it is not known whether she preceded Michael in death or outlived him. 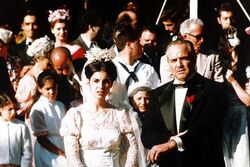 Connie and her father Vito at her wedding in 1945. 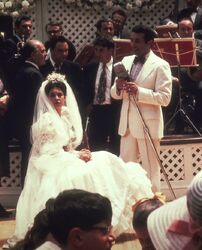 Connie and Johnny Fontane at her wedding in 1945. 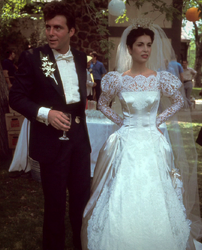 Connie and her husband Carlo Rizzi at their wedding reception in 1945. 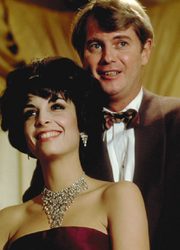 Connie and her lover Merle Johnson in the 1950s. 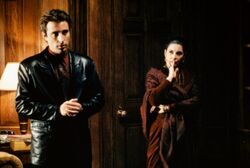 Connie and her nephew Vincent in 1979. 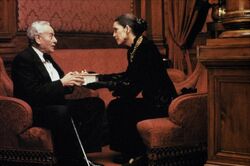