Barry Malkin began his career working as an apprentice to Dede Allen on the 1962 film America America. Working on that film he met the editor Aram Avakian, and went on to become his assistant editor on the 1964 film Lilith. He was credited as full editor for the first time on the television series The Patty Duke Show.[1]

He and Coppola wanted him to be able to edit the first Godfather film, The Godfather, but he ultimately chose not to participate so he could be with his wife during her pregnancy.[2]

He was nominated for two Academy Awards for editing. The last film he worked on was The Last Bounce in 2003.[2] 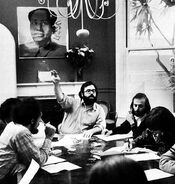 Add a photo to this gallery

Retrieved from "https://godfather.fandom.com/wiki/Barry_Malkin?oldid=87274"
Community content is available under CC-BY-SA unless otherwise noted.