It's Only Business (original)
Royal Flush (Blackhand and Don's Editions)

Corleone victory
The Baptism of Fire was the final act in the Five Families War, which saw a complete victory for the Corleone family.

After a sit-down of the Commission in 1948, Don Vito Corleone vowed that he would not avenge the death of his son, Sonny, providing an end to the bitter war.

However, his son Michael, who had just returned from Sicily, took the burden upon himself to eliminate the rival families, without breaking Vito's vow, likely Vito's plan the whole time.

Michael, as an alibi, stood godfather to Michael Francis Rizzi, his sister Connie's son. As he read out the vows, the murders took place.

Victor was on his way to a meeting, when he was shot down in an elevator along with his bodyguard by Peter Clemenza.

Moe was enjoying his time being massaged in a massage parlor in Las Vegas, until he was shot in the eye by a hitman of the Corleone family, reportably Al Neri.

Around the same time, Carmine Cuneo was at a hotel. Cuneo was unaware that Corleone soldier Willie Cicci had infiltrated the hotel, and trapped Cuneo in the revolving door, before shooting him four times.

Unlike the other Dons, Tattaglia was less concerned with matters of business, and was enjoying time with a hooker in a bungalow off Sunrise Highway, Long Island, when he (and the prostitute he was cavorting with) was gunned down by Rocco Lampone and another hitman.

Barzini had arranged to ambush and kill Michael Corleone through his caporegime Salvatore Tessio, but Michael had long anticipated such a move. Barzini had just returned from the Foley Square Courthouse, and was making his way down the steps, before he was assassinated by Al Neri, who was disguised as a policeman.

During that same twenty-four-hour period several other murders of Corleone enemies took place. Salvatore Tessio was killed for his betrayal by Corleone button men. Afterward, Carlo Rizzi was garroted by Peter Clemenza at the Corleone mall. Two of the highest-ranking Barzini family enforcers were shot to death in a restaurant in Mulberry Street. A fixer of trotting races was killed outside his home. Two of the biggest shylocks on the waterfront disappeared, only to be found months later in the New Jersey swamps. Also, Fabrizio was shot in the face at a pizzeria in Buffalo.

In the video games

The following individuals were involved:

Michael Corleone - Michael Corleone wasn't involved in the slayings of the four rival families. He was at his baptism, that of his nephew, and was renouncing Satan and all his pomps.

Peter Clemenza - Clemenza is ready with a shotgun during the assault on Don Stracci.

Don Stracci - Stracci and his team of bodyguards are ready to talk, and Clemenza has scheduled the meeting. Stracci is trusting that the Corleones don't double-cross him.

Willy Cicci - The Hell's Kitchen hit man has been keeping the Cuneos under surveillance for days and has pinpointed the Cuneo Don in Midtown. He's here to help on the hotel assault.

Don Cuneo - Holed up at the Savannah Hotel, Don Cuneo has surrounded himself with bodyguards and hopes to slip away via the underground garage and parking lot.

Rocco Lampone - Rocco Lampone is enjoying the atmosphere of Sal Tessio's haunt, the Embassy Club. So much so, that he hasn't pinpointed Don Tattaglia's location yet. Bring him along to the firefight.

Don Tattaglia (and friend) - Don Philip Tattaglia spends most of his time planning unspeakable acts on call girls rather than the future of his Family. Separate him from his friend permanently.

Al Neri - Al Neri has a daring plan to attack the last of the rival Dons; he's dressed as a police officer, and even has the squad car. He's heading for the courthouse steps and needs an accomplice.

Don Barzini - The menace of Don Barzini, his tireless assault on the Corleones, and the murder of your own father, is soon to be at an end. He's at the courthouse, probably buying a judge or two.

The baptism of Michael Francis Rizzi. 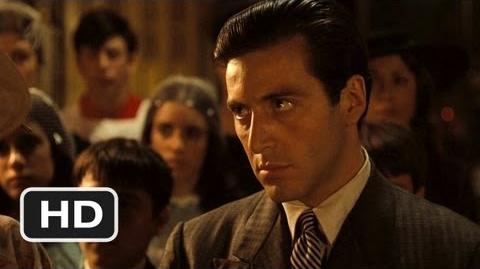