Apollonia Vitelli was born in the hills around Corleone, Sicily. Apollonia was the only daughter of a Greek mother and a Sicilian father, both of whom were incredibly protective of her and never wanted her heritage to be confused. She was the third child, having two older brothers. Apollonia grew into a very beautiful young woman.

"In Sicily, women are more dangerous than shotguns."
―Calò[src]

Shortly after Michael Corleone arrived in Sicily following his escape from New York, Apollonia encountered Michael, who was returning from an excursion in the village of Corleone with his bodyguards, Calò and Fabrizio. Michael was instantly attracted to her and wanted to find out who she was. Apollonia was sixteen or seventeen at the time. Calò and Fabrizio told Michael that he had been hit by what Italians call "the Thunderbolt" – a powerful, almost dangerous longing in a man for a particular woman. After making inquiries with Apollonia's father, Michael gained a cautious approval from Signor Vitelli to begin a traditional courtship of Apollonia, which the entire Vitelli family would be chaperoning.

Over the next weeks, the Michael and Apollonia met each other at the Vitelli home every Sunday after church. Michael participated in Vitelli family dinners and walked with Apollonia while her family observed. Michael presented Signora Vitelli with jewelry to gain her approval before she passed it on to her daughter as a gift. The courtship served a dual purpose: Michael would show respect for the Vitelli family, his future in-laws, and for him to honor the fact she was a "respectable" young woman- a virgin. After some time, Signor and Signora Vitelli gave their blessing for Michael to marry Apollonia. Signor Vitelli gave Apollonia away in a traditional Sicilian wedding ceremony.

Apollonia had a loving marriage with Michael, albeit a very short one. She had also taken some traits that her parents had worried about in the first place; that she was beginning to distance herself from her Sicilian roots. Now having an American husband, Apollonia had started to adopt ways of American women, such as cigarette smoking and new hairstyles. Michael's American attitude about relationships gave Apollonia more freedom in their marriage than traditional Sicilian ones Apollonia had grown up seeing. Michael also attempted to teach her English and began teaching her to drive. This indirectly led to her doom one day as the couple was nearing their first anniversary.

When Michael was readying to relocate from Don Tommasino's villa due to concern for his safety after the murder of his brother Sonny, Apollonia wished to impress her husband and show him her newfound driving skills — Sicilian women in that time generally did not learn how to drive. When she started the car to drive towards him, she unknowingly ignited a bomb planted in the car, intended for Michael, the subsequent explosion killed her instantly. The attack was orchestrated by Michael's trusted bodyguard, Fabrizio, who was paid off by the Barzini family from New York.

After Apollonia's death, Michael returns to the United States and marries Kay Adams, though she is unaware that he had been married, then made a widower while he was living in Sicily. Despite initially maintaining a steady marriage with Kay, Michael’s heart truly remained with Apollonia. Years later, Fabrizio was killed in the pizza parlor where he worked, by a Corleone hitman; concurrently with the infamous simultaneous hit of all the family rivals.

Apollonia's death made Michael a man with an uncontrollable thirst for revenge, which would set a chain reaction of events in motion. Ultimately, Michael's attitude he gained when he was widowed would cause the self-destruction of the Corleone family. Michael would never fully recover from the loss and he would remember Apollonia and her death for the rest of his life.

"She was wonderful, beautiful. I loved her. And then she died. My trusted bodyguard planted a bomb in my car. She drove it before I did."
―Michael Corleone[src]

Despite re-marrying and having two children with Kay, Michael carried the memory of Apollonia with him until his death. Though he tried to move on and love Kay to same degree, he could not. Along with the murder of his brother Santino, and the attempted assassination of his father Vito, Appolonia’s death was the final tipping point that caused Michael’s transformation into the ruthless and revenge driven crime lord he became. He was particularly reminded of her by the Sicilian ballad "Brucia La Terra", which his son Anthony performed for him upon his return to Sicily in 1980.

In 1997, 49 years after her death, Michael died in the courtyard of Don Tommasino's villa, the same courtyard where her life was taken.

Apollonia at her wedding.

Apollonia and a flower girl at her wedding.

Michael and Apollonia dancing in their wedding

Michael teaching Apollonia how to drive

Apollonia showing off her driving skills to Michael. 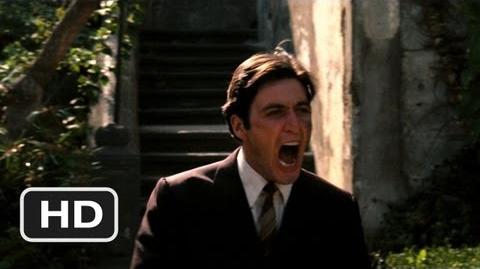