The Altobello conspiracy was a plot devised by Don Altobello and Licio Lucchesi to eliminate Michael Corleone.

In 1979, by the time that the Corleone family had gained legitimacy and had sold most of its interests, Joey Zasa inherited the businesses in New York. Vincent Mancini, the illegitimate son of Don Michael Corleone's brother, Sonny, got into a fight with Joey Zasa during a meeting with Michael to award him the Italian-American Man-of-the-Year as well as to settle business, biting off a part of his ear. Later on, Joey Zasa dispatched two thugs to assassinate Mancini in his apartment, but both were killed.

Michael Corleone offered Archbishop Gilday a hundred million dollars for the resurrection of Sicily, which was in poverty. Michael also purchased a controlling interest in Immobiliare from the Vatican in return for six hundred million, in addition to his past money that he had given, in order to fulfill the money owed by the deficit in the Vatican.

That same year, Joey Zasa and Don Altobello conspired to eliminate the Commission and kill Michael at Atlantic City, massacring the entire room of dons except for Mancini, Al Neri, and Michael, who managed to escape from the attack. Altobello had earlier left the room to discuss matters with Joey Zasa, who claimed that Michael was now his enemy, beginning the mob war.

Afterwards, Connie Corleone and Al Neri gave Vincent the go-ahead to run a hit on Joey Zasa. Corleone soldato Lou Pennino scratched up Joey Zasa's raffle car, crying out at him as the paraders marched on through Little Italy, which had become a slum due to Zasa's drug trafficking. Zasa's aide Anthony "The Ant" Squigliaro was killed by an assassin disguised as one of the carriers of the parade piece. Then, Zasa tried to flee but was clipped three times by Vincent Mancini, in disguise as a mounted policeman.

Michael Corleone, who did not give authorization for the killing, lashed out at Connie, Al, and Vincent, and made them pledge not to do anything without his permission first. He met with Don Altobello, stating that he would visit Italy to see his son Anthony's play debut, as well as to meet with other rich people over the immobiliare matter. Frederick Keinszig and Licio Lucchesi, in addition to Archbishop Gilday, all met with Michael, who refused to do business with them. The three seized power when Paul VI died of illness, and soon Michael took refuge with Don Tommasino, who was an old friend to the Corleones. However, Tommasino was killed by Mosca, who found out that he was giving shelter to the Don. Then, Michael and his family relocated to the refuge of Calò, a former bodyguard of Michael. He swore allegiance to Michael, but soon kissed the hand of Vincent Mancini, who longed for the order to kill the three opponents after spying on Altobello.

Soon, at the Teatro Massimo, where Anthony was performing, Mosca killed The Twins and an additional bodyguard to Michael Corleone with knives, and prepared to assassinate Corleone. Connie gave Altobello a poisoned cannoli for his 80th birthday, which killed him silently. At the same time, Vincent dispatched Al Neri, Calò, and another hitman to assassinate the three opponents to Cardinal Lamberto, who became Pope John Paul I. Al Neri shot Gilday, Calò stabbed Lucchesi, and the other hitman suffocated Keinszig to death and hung him for display, all before the end of the play. However, the pope drank poisoned tea that was offered by Gilday prior to the latter's death and suffocated.

After the play ended, Mosca shot Mary Corleone, Michael's daughter, though intending to hit him. He failed, and was shot by Vincent Mancini. Though unfortunately that Mary died, the last opponent to Michael Corleone was killed when Vincent fired that shot from Mosca's revolver into his own heart.

Vincent Mancini continued to be the don of the Corleones, and Michael died alone in 1997 in Bagheria, Sicily. 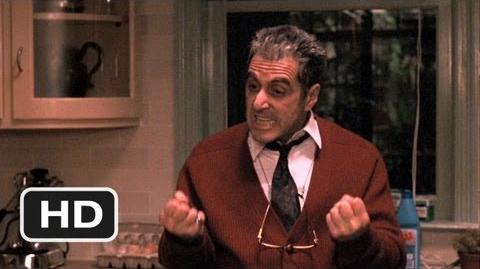